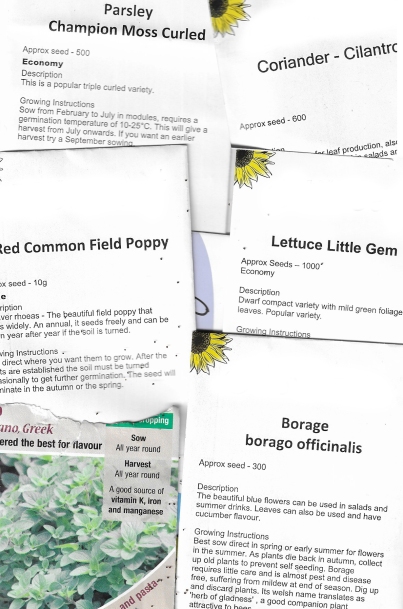 We’re starting to think of next year’s gardening even if at the moment we wouldn’t want to actually go out in our garden as it chucking it down but it’s never too early to start thinking of next season.

We bought a lot of herb seeds last week to restock up on the pots just outside the kitchen (plus some poppies to chuck in the wild area) and hopefully get a few herb pots going on the windowsill. We’ve just noticed on one of the seed packets that the original common name for Borage was “burrage” or “llanwenlys” a Welsh word for “Herb of Gladness.” We’ve also just found out that the herb is used in the German green sauce known as Grüne Soße or Grüne Sosse. Good stuff!

Remember even if you’ve got a few seed packets in your seed box that may be out of date don’t worry they are worth trying (except Parsley that really needs fresh seed to start germinating). It’s all in the preparation!