And here’s something interesting from our good friend across the pond, Justin Patrick Moore with a piece that’s well up our street! Cheers Justin!

There is nothing like some good down beet veggies, and downtempo music, to get into an up beet mood. I was thinking of this yesterday when scraping out the remains of my crock full of homemade beet and red cabbage sauerkraut. I was also thinking about something I recalled from Sandor Katz’s book Wild Fermentation (where I learned the basic techniques for making kraut and sour pickles, among other things). He said something along the lines of “The only difference between rotting vegetables and a fermented food is salt.”

Boy, ain’t that the truth. Before I tried making kraut, I always thought it would be hard. It turns out its as simple as chopping up a bunch of cabbage, and other veggies, throwing a bunch of good salt on them, pounding them down into a crock, then sticking a plate on top of it all, with some weights or a clean rock you’ve boiled, and then waiting for the amazing lactic acid transformation.
Sandor’s recipe for Kraut and is super easy to make with just some basic equipment and veg. Recipe in detail here.

This batch of kraut that I made here included the following ingredients, all shredded, like a punker rocker making dangerous swipes at a guitar:
About 9 or 10 raw beets
1 head purple cabbage
1 bunch of radishes
1 turnip
1 head of garlic
3 or 4 habaneros
1 large piece of ginger
The ginger & habanero pepper marry really well together with the flavor of the beets. I suppose you could also use the juice to dye your hair red, or if you were wanting to make your own Hammer horror film.
(By another chain of association, all this puts me in mind of that classic Dead Kennedy’s album, Fresh Fruit for Rotting Vegetables. Now you know there is a cure for that, just add salt.)
I’m looking forward to when my pickling cucumbers come up in the garden. That’s when I’ll use Sandorkraut’s sour pickle recipe again. Mr. Katz is a great author, and Wild Fermentation, and his other book The Art of Fermentation, cover not only kraut and pickles, but sourdough and other living breads, wine, beer, cheese and even stuff like how to make miso or tempeh. It’s one of the few kitchen books I have that really makes the stuff grown in the garden, whether mine, a friends, or something picked up at the market, really sing with all that salt. Once you make a few batches of something you’ll be experimenting and trying new things out in no time, because it really is pretty simple once you get the knack.

With all that, I’ll leave you with this groaner and a track called Cultivator Dub from the DJ Spooky vs. Twilight Circus Dub Soundsystem collaborative album Riddim Clash.
What do you call someone who raps about vegetables? A Beet boxer.

…you’re putting runner beans supports in (on the 2nd of April) and you’ve carefully put three wire rings on each one, all made to exactly the same size and put at the same height. Talk about having too much time on your hands!

We even ripped up some comfrey leaves and mixed them in just below the surface, hopefully that’ll add something to the soil.

The last couple of days have been cold but a few quick trips down the garden have been in order for a nice bit of sanity from a self-isolating worldview. A big shout to our good friend Nancy B who a short while back, suggested we get a Clematis Montana for the back fence. It’s now woken up and is starting to show a few flowers. The plant will be getting some of that comfrey feed when it’s ready!

Thanks to Thompson & Morgan (and Shannon’s and all the other plant and seed sellers of the world who are working flat out keeping gardeners supplied!) for sending us an order which included some Peas (Jumbo) and Lettuce (Little Gem) that have gone in one of our “Blue Peter” style, cut-price budget cold frames. 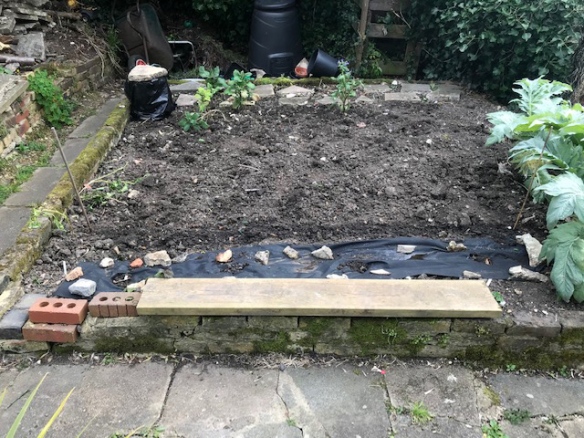 Earlier this year we mentioned we were going the “rest” the back bed and fill it with some wild flower mix. That idea’s gone out of the window now as we stuck in a row of peas behind the spuds we put in the other week. Best laid plans and all that!

But the question on everyone’s lips here is something we heard a passer-by the other day say into his mobile whilst on his daily exercise regime “Do we still have to put our bins out during lockdown?”