DJ Frederick’s Free Radio Skybird returns to the 49 metre band next Sunday July 7th 2019 via http://www.channel292.de/ on 6070 kHz at 1400 UTC (1500 UK time). With a mixture of features and music (anything from jazz, avant-garde, ambient, folk, rock, indie and more) the hour transmission will also include One Deck Pete’s “Sounds of the shortwave” a ten minute shortwave radio inspired mix including tracks from Aljosha Konstanty (AK), Jay-Jay Johanson, Jazz’min Tutum and Rephazer. Tune in just after Gardener’s Question Time! #freeradioskybird

A nice bit of Friday night downbeat business first heard on On The Wire a couple of weeks ago. It’s by Yaaard off the album “How to download a glass of water” and it’s called “I Lit a candle” and it’s a tune! 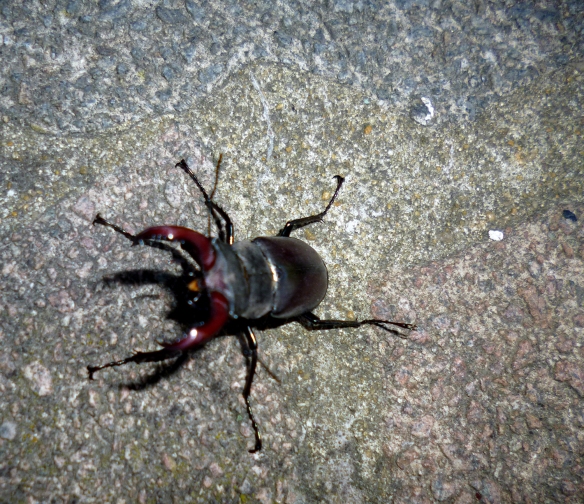 A few weeks ago a couple of the Weeds team went on a bat walk around Camberwell New Cemetery which was great fun. It’s not every Friday night you can wander around in the dark in your local cemetery carrying bat detectors.

On the night we were told if we wanted to encourage more wildlife including stag beetles into our garden we’d have to keep some wood piles and have the odd rotting stump lying about. Well we heeded the expert advice and have been visited a few times by the friendly stag beetle (here’s one from tonight). When these things take off it reminds us of a heavily fortified military vehicle. Bonkers!

A big thanks again to Thompson & Morgan blog (have a look as it’s interesting stuff with tons of hints and tips!) for sending us some seeds to trial this year and this is how they’re doing in July! They are all watered on a daily basis and have a comfrey feed weekly. 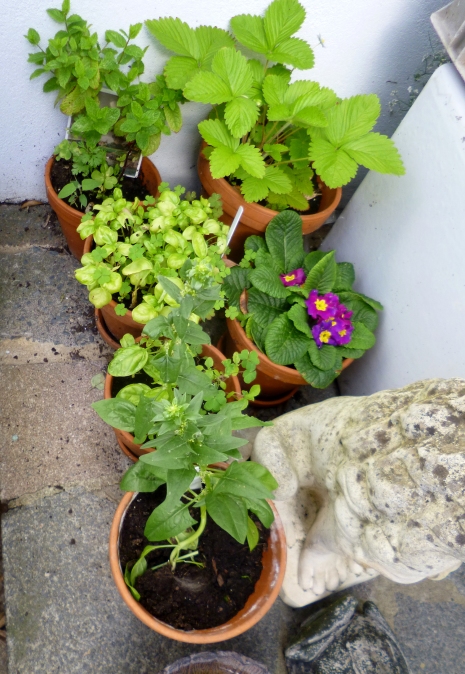 The above is the spinach (in the front pot) which was started off on the kitchen windowsill and a couple of the seedlings were transferred outside but here’s the pot with two left in them. They haven’t gone to seed yet and are doing well!

The daft idea we had to stick a row of the lettuce and spinach in the area shaded by some broad beans (so they didn’t bolt) may have not been a good one but here’s what’s going on so far! We won’t even mention the idea of sowing lettuce in the gully between the earthed up potatoes as nothing has germinated there. 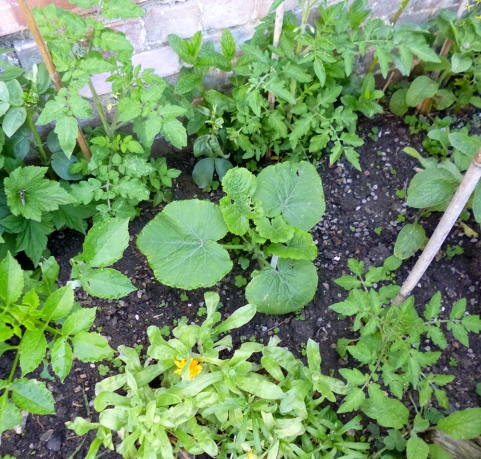 The spaghetti squash is coming on a treat and we reckon we may have put it in the wrong place but “Hey! it’s an experiment”. The other squash that had lots of space to run free has been decimated by the slugs so this is the only one at the moment!

And as the song goes “Where have all the zinnia’s gone?” We don’t know what we done wrong but there’s no sign of any zinnia’s yet. Damn! 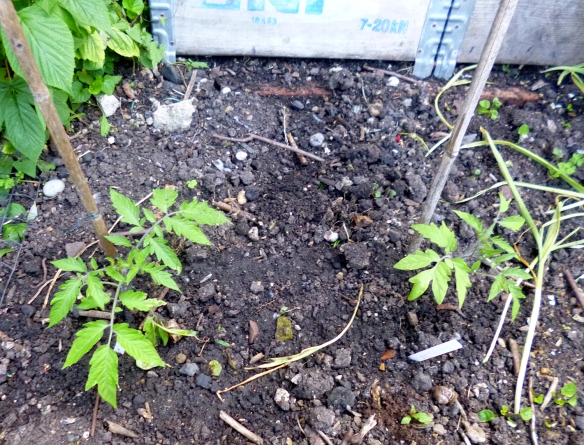 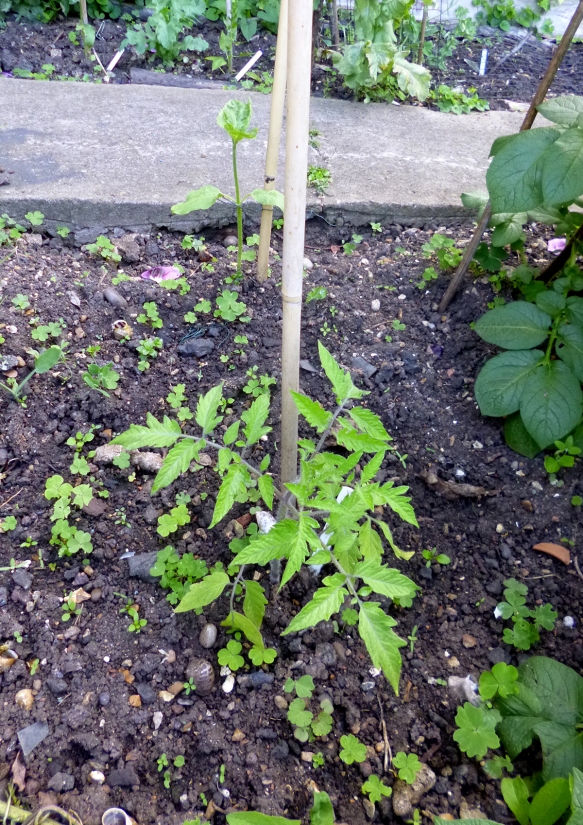 But the tomatoes and sunflowers seem to be doing well and we eagerly look forward to seeing what variety they morph into! Ta again T&M, there will be updates! 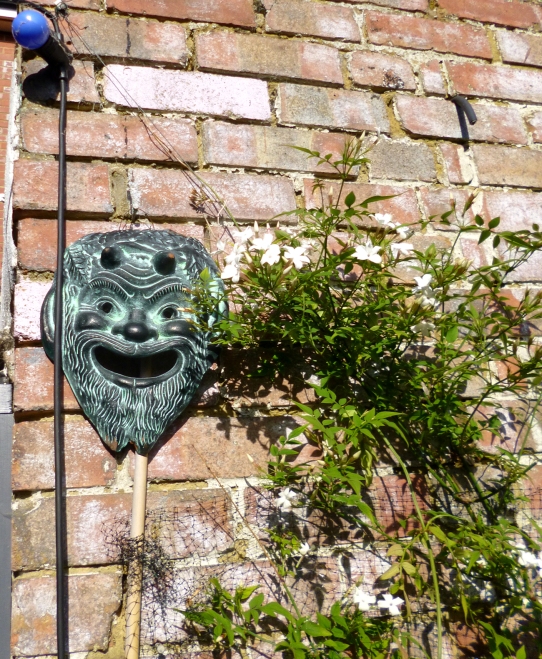 A belated Happy Solstice to one and all! It was a shame we couldn’t get Ken Barlow, Jamie Reid or Arthur Pendragon (they were busy elsewhere) in our garden first thing yesterday to give the plants added help with a blessing or two but we have the next best thing, a bucket of home-made Comfrey Liquid (with added borage and nettle leaves) ponging away nicely! 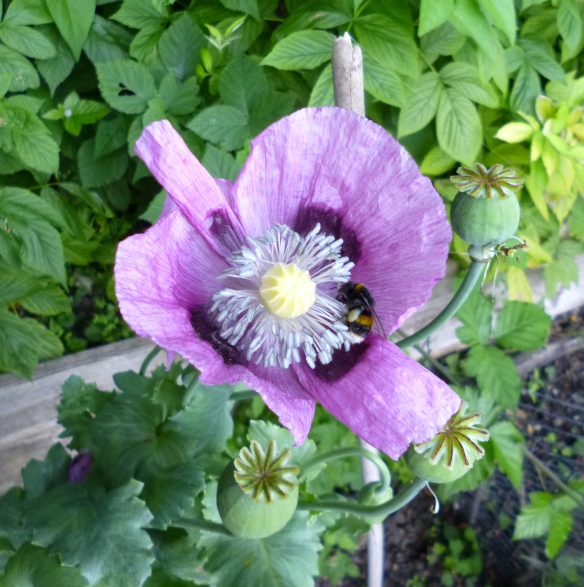 It’s been such a boost (we use it diluted, 10 parts water to every 1 part of the dark stinky liquid on a weekly basis) all over the garden especially the various poppies that are coming up now after we used the “throw em randomly and see” method of distribution from seeds obtained from Shannon’s, ebay or off a seed swap or two. A few years ago we were into how many types of mint we could find, now we’ve moved onto poppies!

We mention Comfrey liquid, yesterday we passed on a bottle of the said pongy stuff to Honor Oak Park train station to add some weight to their entry in the annual “Station in bloom” contest. We gave them an accompanying set of instructions ‘Warning this stuff smells (think of  body odour and times it by twenty), apply once a week diluted 10 to 1 very early in the morning or you will lose customers!” Best of luck to them! 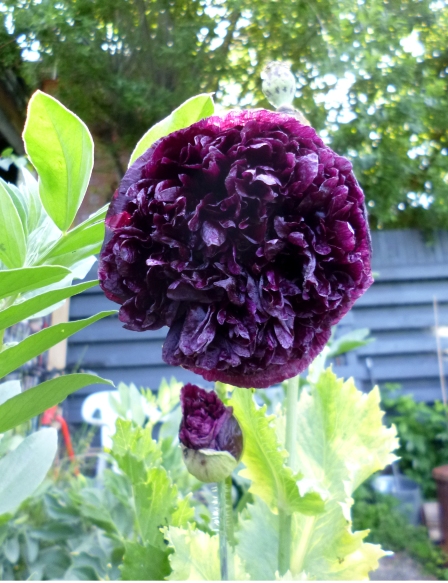 If you like it chilled like we do on a Thursday night here’s one on a slow-mo tip to soothe those aching bones from Jay-Jay Johanson called Not time yet and it’s a grower! There’s a lovely dub of the track as well. Search it out!

And a lovely dub of Sandra Cross & Vibronics “Sound System Girl” doing the rounds on the radio. Not chilled but still one for a Thursday night!

A big shout to Shane at the ever excellent Garden of Earthly Delights for a top show last Friday which featured Mårble, Creation Rebel and Errol Grandson and lots more. The show also rebroadcasted all of Dr Strangedub’s classic “In the garden of dub” mix. Big up all dub gardeners everywhere! Full tracklist of the mix here.